Apollyon Mourningstar is a moniker cobbled together from the fabled boogeymen her old tribe scurried away from, bestowed in fearful whispers now a badge of pride as the pale Tiefling in ebon plate and cloven hoof scours the land in search of a worthy opponent. Apollyon cultivates balance by separating the wheat from the chaff, her harvest reaped by great axe instead of sickle.(edited)Despite her rather explosive temper and barbaric trials, Apollyon holds a great deal of respect for those who are competent in their chosen craft and believes wholeheartedly in survival of the fittest. The smartest, strongest, and most charming will be replaced by those who prove themselves more capable with the cycle repeating itself. That said, Apollyon has a particular soft spot for animals. (She was raised by an Owlbear but shhh, she doesn’t talk about it.)Name: Apollyon MourningstarRace: Zeriel Tiefling(edited)Description: Long, black hair. Glowing, yellow eyes. Cloven hoofs. Horns from her temples going forward, like a bull’s. Sickly, pale white skin.Class: Bear Totem Barbarian and Weapon Master Fighter. Background: Far Traveler. 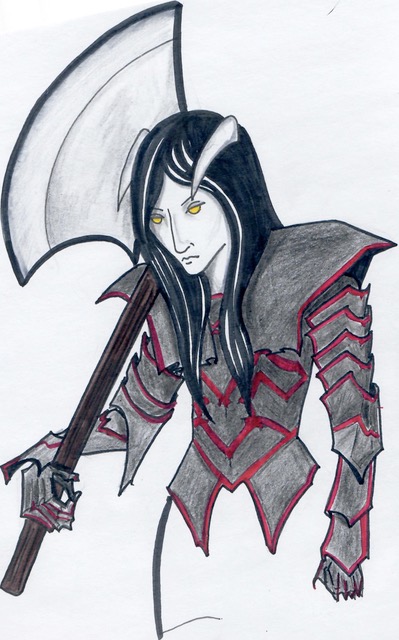 Velvet is a Voice Actor and podcaster who can be found on Fangirls as Christy and on Flight Risk, as well as Stories of a Broken Sun every week. Velvet can be reached on Twitter @OGBrownSugar